Homemade pasta is one of the most famous foods of the Mediterranean diet.

Along with pizza, it has become the symbol of Italian gastronomic culture worldwide.

The question of its geographical origin, however, is very controversial and resulted in two different theories.

Over time, an intense debate has been established between Italy and China, which compete for primacy over its creation and promotion.

In fact, there is a theory that states that a more archaic version of pasta was imported to Italy by Marco Polo following a trip to China.

The Chinese, however, did not know wheat, the main ingredient of Italian products, and mainly used rice and millet instead.

Even if the origin of pasta was Chinese, the preparation of homemade pasta remains an exclusively Italian tradition and has differed from any other gastronomic culture due to its high priority in Italian cuisine as early as the Middle Ages.

Each region in Italy has its own specialties that are combined with precise aromas and seasonings.

Pastarello: it’s all about pasta!

Daniele and Luca, originally from Rimini and Milan, decided to focus on homemade pasta and its preparation.

In addition to pasta, Pastarello offers various appetizers and specialties, such as the Burrata from Puglia, the Florentine steak, the beef fillet with green pepper – to name but a few.

For five years now, they have been specializing in homemade pasta. Their main purpose is to make sure their guests get to experience the true tradition of Italian pasta.

In their restaurant, they prepare homemade pasta on a daily basis, both with semolina and egg. They offer their guests traditional Italian recipes (such as carbonara, bolognese, etc.) as well as a series of more innovative and experimental dishes.

Check out one of their signature recipes below! 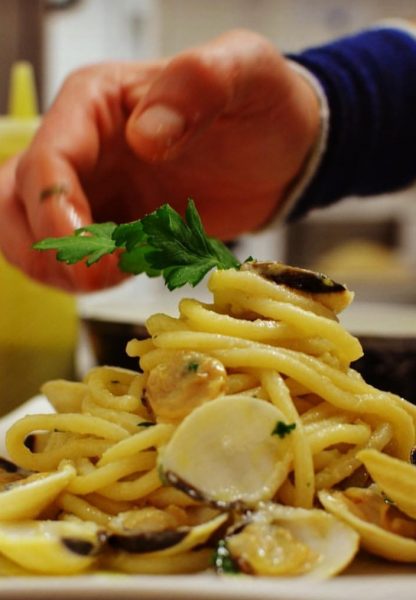 Preparing homemade tagliolini:
make a fountain with the flour and add a pinch of salt;
form a hole in the middle in order to add the eggs;
knead by hand until it becomes a homogeneous ball;
wrap it in plastic and let it sit for 30 minutes;
roll the dough with a rolling pin until you get a flat disk of about 2mm;
sprinkle some flour over the disc, roll it on one side and cut it into slices of 2-4mm;
unroll the slices and mix them with very little flour to prevent them from sticking together.

Preparation for the dressing:
Clean the clams or sea truffles.
Now let’s prepare a cream with 1 tablespoon of oil + 1 tablespoon of flour for each serving. Mix the ingredients and put in the refrigerator for half an hour.
This will be used later as our thickener.

Add the clams to the hot oil, cover them to make them open. It will take a couple of minutes.
Add a little white wine or prosecco and let it evaporate.
Add a tablespoon of Pastis or Pernot and cook for about a minute.

As the dressing is quite liquid, add the thickener prepared at the beginning.
The liquid will become creamier.

Cook the pasta al dente and add the dressing.
Serve it with some fresh parsley and pepper.

With their restaurant, Pastarello, Daniele and Luca have decided to promote the true tradition of homemade pasta abroad. If you are in Germany, in Nuremberg, make sure to taste one of their typical dishes!

And in case you are in Italy and would like to prepare the most typical and traditional dishes of the Italian cuisine, take a look at our experiences:

Traditions and recipes at Lake Bracciano

The flavours of Tuscan cuisine