When you see it on the shelves of the shops you think immediately: “It’s Christmas now!”

Without it, it’s not Christmas at all in Italy! We are talking about the typical dessert of the Christmas holidays that accompanies every family, every dinner, every toast of good luck. The undisputed king of Christmas parties, il Panettone!

THE PANETTONE BETWEEN HISTORY AND LEGEND 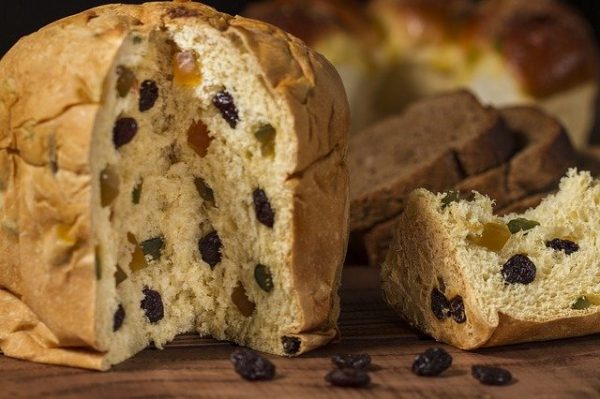 Together with Pandoro (its version without candied fruits), Panettone is the symbol of Christmas in Italy.

Its origin is shrouded in different stories and legends.

There are those who say that the origin of Panettone (from Pan de Toni) derives from Toni, a humble servant of Ludovico il Moro’s kitchen, duke of Milano, who on Christmas Eve burns the cake prepared for the ducal banquett.

In order not to let the Duke without a dessert, he used the the yeast base that he had saved for him and combined it with flour, eggs, sugar, candied fruits and raisins, until he obtains a soft dough.

Another legend tells of a nun, Sister Ughetta, cook of a Milanese convent, who made a cake for Christmas for her sisters with the few ingredients available in the monastery pantry.

She added eggs, sugar, candied fruits and raisins to the usual bread dough. And it was a success.

Ugo, Ludovico il Moro’s falconer, was in love with Adalgisa, the daughter of a baker whose business was not going very well.

Ugo got hired in the shop of Pan di Toni, Adalgisa’s father, and created a special dessert to try to revive the fate of the shop.

The dessert was a dough with butter enriched with eggs, candied fruits and grapes, which had a great success.

The Pan de Toni shop became famous, Toni rich, and Adalgisa’s parents agreed to the marriage of Ugo and Adalgisa.

THE TRUE ORIGIN OF PANETTONE

Among the many legends, the only certainty is that the panettone was served for the very first time in the Middle Ages, to prepare very rich bread for Christmas.

For historians, the first documentary evidence of the existence of panettone dates back to 1606.

At that time it was unleavened, similar to the pandolce of Genoa. In the nineteenth century the recipe was improved and the dessert took the name of “panattón or panatton de Natal”.

Pandoro or panettone? Pandoro is the variant without candied fruit of the panettone.

This dilemma divides Italy in two and is one of the most popular disputes in our country for which there does not yet seem to be a real winner.

And you? Have you tried both of them yet?